Illustrator David Craig has always loved creating pictures. As the son of a Canadian WWII pilot and a British Women’s Auxiliary Air Force photographer, he grew up with aviation all around him. At home, he was an avid history buff, and his drawings often depicted high-flying adventures featuring British World War II Spitfires. Today, David still maintains those passions. “I love to tell a story with my pictures,” David explains. “I like to create a mood. I want to put you there.” He has illustrated several children’s books including First to Fly the story of the Wright brothers, which won the inaugural James Madison Book Award in 2003. A is for Airplane: An Aviation Alphabet is David’s first book with Sleeping Bear Press. 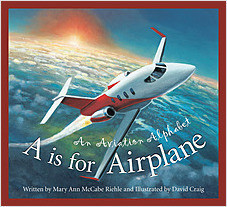 A is for Airplane: An Aviation Alphabet