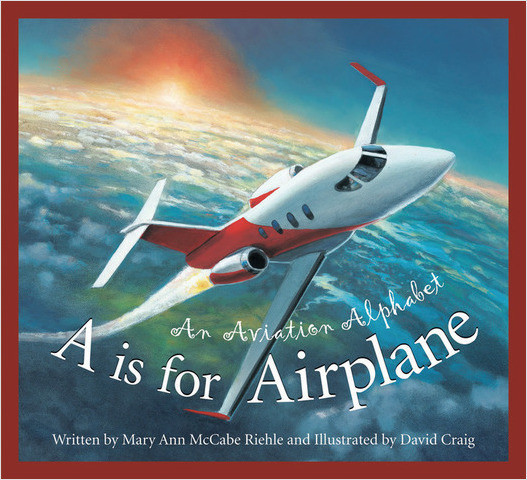 A is for Airplane

Did you know that helicopters can fly forward, backward, and side-to-side? Or that the wingspan of a jumbo jet is almost twice as long as the distance of the Wright Brothers' first flight? Since recorded time, man has looked to the sky and dreamed of ways to fly there. A is for Airplane: An Aviation Alphabet celebrates the roots, inventions, and spirit of the science of flight. Young readers will learn about famous events such as the Spirit of St. Louis's nonstop flight across the Atlantic Ocean and the launch of Columbia STS-1 (the first space shuttle), as well as meet courageous aviators who broke barriers in the air and on Earth like the Tuskegee Airmen and Amelia Earhart. Aircraft of all kinds, including giant airships, wind-dependent gliders, and awe-inspiring F-16s, are depicted in spectacular artwork. The glory of flight is brought to stunning life.As a teacher, parent, and published author Mary Ann McCabe Riehle has encouraged young students and adults to follow their dreams and tell their stories. A is for Aviation is her third children's book. A featured author and speaker at several reading and writing conferences, Mary Ann lives in Dexter, Michigan. David Craig is an avid history buff and his remarkable skill at depicting historical events and people has led to diverse projects including collector's plates and a millennial champagne label. His children's book, First to Fly, the story of the Wright Brothers, won the inaugural James Madison Book Award. David lives in Mississauga, Ontario.

A is for Airplane: An Aviation Alphabet - Teaching Guide