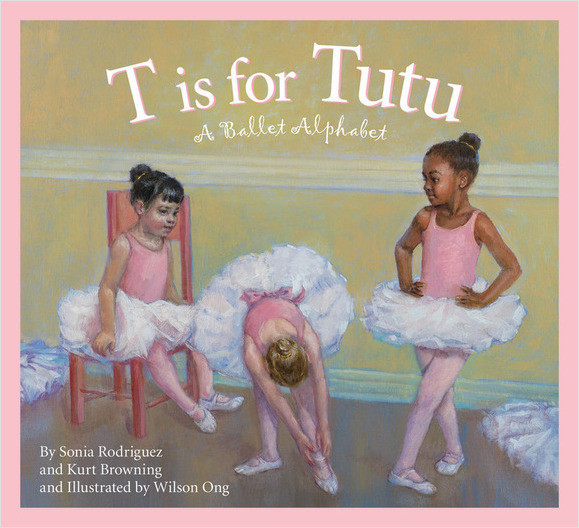 T is for Tutu

Tutus and leotards, pointe shoes and ribbons, stretching exercises at the barre - these are all familiar images when one is thinking of ballet. But there's much more to this historic dance form than pink tulle. There's hard work with years of study. Following the alphabet, in T is for Tutu: A Ballet Alphabet dancer Sonia Rodriguez, with husband Kurt Browning, introduces this dance form from its beginnings at the court of Louis XIV to basic positions and training to famous stage roles. L is for the Leotard that shows the dancer's form. Whenever they are rehearsing it becomes their uniform. Young readers will find themselves pointing their toes, practicing the five positions, and dreaming of being onstage as a sugarplum fairy or a king with a crown. Sonia Rodriguez has been the Principal Dancer with The National Ballet of Canada since 2000. Her husband, Kurt Browning, is a four-time world champion figure skater. Kurt is also the author of A is for Axel: An Ice Skating Alphabet. They live in Toronto, Ontario.Known for his fluid movement and confidence on the ice, four-time world champion figure skater Kurt Browning spins, jumps, and glides his way through the alphabet with A is for Axel: An Ice Skating Alphabet. Kurt was the first figure skater to be named as Canada's outstanding male athlete, was honored by Sports Illustrated as one of the 50 greatest sports figures from Canada, and is a member of Canada's Sports Hall of Fame. Completing the first quadruple jump in competition earned Kurt his way into the Guinness Book of Records. Kurt presently skates professionally with Stars on Ice and lives in Toronto with his wife and son. Wilson Ong went to Brigham Young University, receiving a B.F.A. in painting and drawing. He furthered his studies at the Art Students' League in New York City. He lives in Corning, New York.