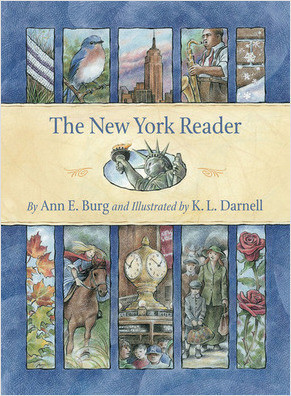 Our Readers (also known as primers) are patterned after the popular nineteenth century McGuffey Readers which were used to teach life lessons and reading skills to young children. From the author of E is for Empire: A New York State Alphabet and Times Square: A New York State Number Book comes yet another reason to enjoy learning about the Empire State. In The New York State Reader Ann Burg uses a variety of writing forms to showcase the state's rich and fascinating history, people, and culture. Poetry (including an original state pledge), counting games, hidden state symbols, and landmark riddles attract and engage beginning readers. Prose, biographies, and short stories challenge more advanced readers. Some of the topics covered are early Native American influence, immigration, and the Harlem Renaissance. With its broad scope, The New York State Reader provides ample opportunity for student/classroom interaction.Former educator Ann E. Burg has been writing since early childhood. Her other books with Sleeping Bear Press are E is for Empire: A New York State Alphabet; Times Square: A New York State Number Book; and Rebekkah's Journey. She lives in upstate New York. K. L. Darnell earned her BFA at the University of Michigan School of Art and Design. She has illustrated all of the books in the Reader series. In addition to her work as an illustrator, Kate is an art instructor. She lives in East Lansing, Michigan.