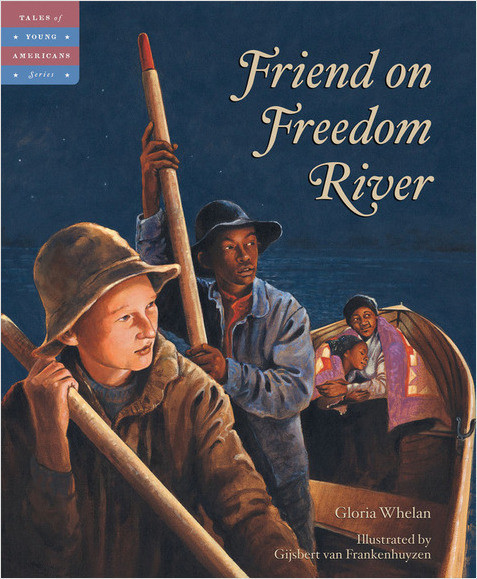 In 1850 the Detroit River was a major track along the Underground Railroad -- the last step to freedom. The journey across the river was dangerous, especially in winter and especially for a 12-year-old boy. When Louis's father left him in charge of the farm he offered his son this advice, "If you don't know what to do, just do what you think I would have done." Louis relies upon his father's words of wisdom when a runaway slave and her two children come looking for safe passage. In the second title in our Tales of Young Americans series Gloria Whelan -- author of National Book Award winning Homeless Bird -- beautifully creates a suspenseful coming-of-age story while illuminating a difficult time in America's past. Ms. Whelan's narrative again shows the human spirit will forever shine brightly in dark times. Freedom River - part of our Young Americans series - will quickly become a favorite for its important message and look at history from a youngster's eye. Artist Gijsbert van Frankenhuyzen - a Sleeping Bear Press favorite - treats the material as only he can. Each illustrated page demonstrates the same mastery and devotion to his craft as the young heroes he brings to life.