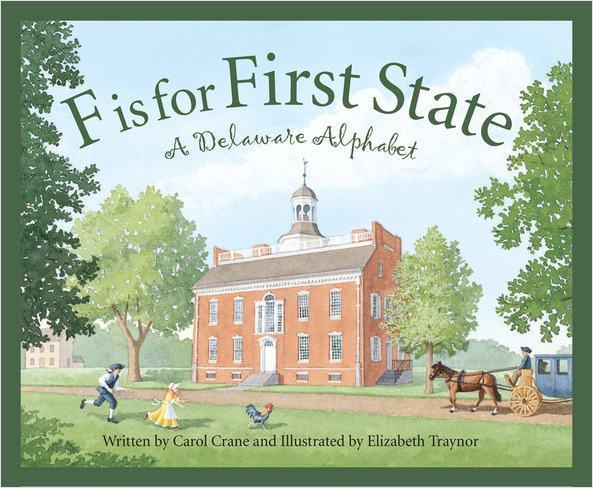 F is for First State

As the first state to ratify the United States Constitution, Delaware rightfully earned its nickname of "First State." Though small in size, it is a treasure trove of history (Fort Delaware), inventions (the Victrola), and garden wonders (Winterthur). State symbols such as the Blue Hen Chicken and peach blossom speak to the character and traditions that formed the state. Historian Carol Crane loves looking through the kaleidoscope of the past and has taken many delightful journeys through Delaware. She loves to imagine her Swedish ancestors coming to this country on the Kalmar Nyckel, building log cabins, or starting the first Swedish church in Wilmington. Carol lives with her husband in North Carolina and travels the country speaking at education conferences across the nation."F is for First State" is Carol's 11th book with Sleeping Bear Press. Elizabeth Traynor decided to be an illustrator when she was fifteen years old, while taking art classes at the Delaware Art Museum. She received her BFAin illustration from Rhode Island School of Design. An illustrator as well as an illustration professor, her work can be seen throughout the country, from book covers, newspapers and magazines, to ads and packaging. Elizabeth lives in Massachusetts and California.