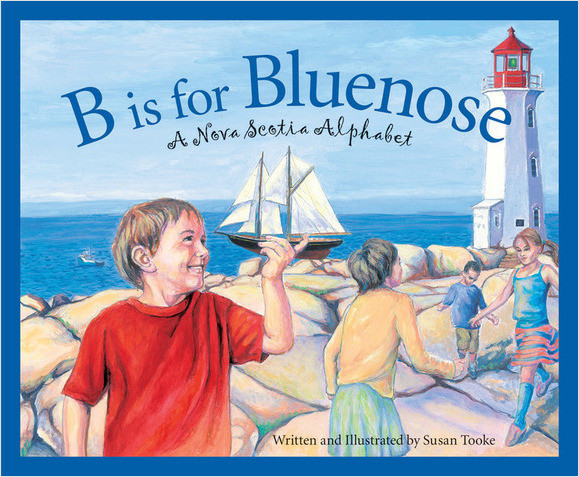 B is for Bluenose

Who were the first people of Nova Scotia? What massive star-shaped fortress can be found in Halifax? What type of water plant not only provides food and shelter to Canadian wildlife but also lessens coastal erosion? The answers to these questions, along with many facts, traditions, and much history can be found in B is for Bluenose: A Nova Scotia Alphabet. Readers young and old can travel the Cabot Trail along Cape Breton Island's coastline, stop and listen to the sound of bagpipes floating on the breeze, or sample the delights of the quaint Queens County Fair. From the lovely A of Annapolis Valley to the Z of Sable Gully's varied zoology, everyone will enjoy this alphabetical journey that showcases the riches of Nova Scotia.Born in New Jersey, Susan Tooke received her professional training from Virginia Commonwealth University in Richmond, Virginia, and the New School in New York. After moving to Canada she illustrated her first book in 2000. Her work has been chosen by the Canadian Children's Book Centre for the Our Choice Award, and she has received the Lillian Shepherd Memorial Award for Excellence in Illustration. She also illustrated F is for Fiddlehead: A New Brunswick Alphabet. Susan lives in Halifax, Nova Scotia.

B is for Bluenose: A Nova Scotia Alphabet - Teaching Guide