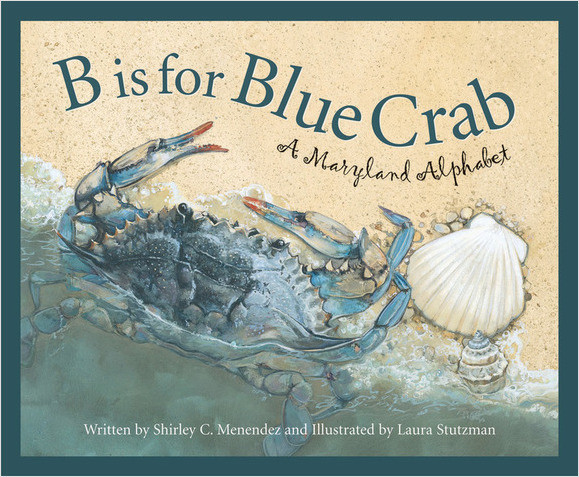 B is for Blue Crab

Located just below the Mason-Dixon line, Maryland is flavored with both northern and southern culture and tradition. Defined by the largest estuary in the United States (The Chesapeake Bay), Maryland's historic sites/sights include capital city Annapolis and the U.S. Naval Academy, Muddy Creek Falls, and the running of the Preakness Stakes in Baltimore. Noteworthy residents include Harriet Tubman and Francis Scott Key.Shirley C. Menendez grew up in Staunton, Virginia, and graduated from Mary Baldwin College. She earned a master's degree in library science from Drexel University. Before joining the administrative staff of Georgetown University, she was a librarian in the Prince George's County Memorial Library System in Maryland and the Westchester Library System in New York. Shirley lives in Gaithersburg, Maryland, with her husband, who is also a writer. Laura Stutzman graduated from the Art Institute of Pittsburgh, and in 1984 formed a studio called Eloqui with her husband, illustrator Mark Stutzman. She has created imagery for books and magazines, corporations, non-profit organizations, and privately commissioned portraits. Laura teaches a weeklong camp each year for children grades 8 through 12 who are serious about art. She makes her home in Mountain Lake Park, Maryland.

B is for Blue Crab - Teaching Guide