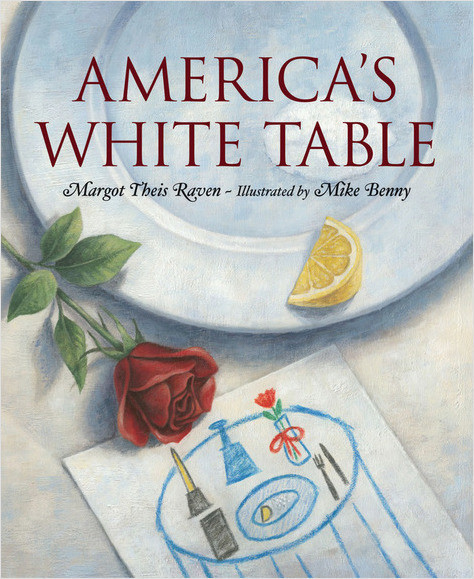 The White Table is set in many mess halls as a symbol for and remembrance to service members fallen, missing, or held captive in the line of duty. Solitary and solemn, it is the table where no one will ever sit. As a special gift to her Uncle John, Katie and her sisters are asked to help set the white table for dinner. As their mother explains the significance of each item placed on the table Katie comes to understand and appreciate the depth of sacrifice that her uncle, and each member of the Armed Forces and their families, may be called to give. It was just a little white table... but it felt as big as America when we helped Mama put each item on it and she told us why it was so important. "We use a Small Table, girls," she explained first, "to show one soldier's lonely battle against many. We cover it with a White Cloth to honor a soldier's pure heart when he answers his country's call to duty." "We place a Lemon Slice and Grains of Salt on a plate to show a captive soldier's bitter fate and the tears of families waiting for loved ones to return," she continued."We push an Empty Chair to the table for the missing soldiers who are not here..." Margot Theis Raven has been a professional writer working in the fields of radio, television, magazines, newspapers, and children's books for 30 years. Margot's first children's book, Angels in the Dust, won five national awards, including an IRATeacher's Choice Award. Her first book with Sleeping Bear Press, Mercedes and the Chocolate Pilot, was the runner-up for the 2004 Texas Bluebonnet Award. Mike Benny's illustrations have appeared in Time, GQ, New Yorker and Sports Illustrated Magazines. He has also been awarded two Gold Medals from the Society of Illustrators. This is Mike's first children's book. He lives in Austin, Texas with his wife Mary Ann and daughter Adele.