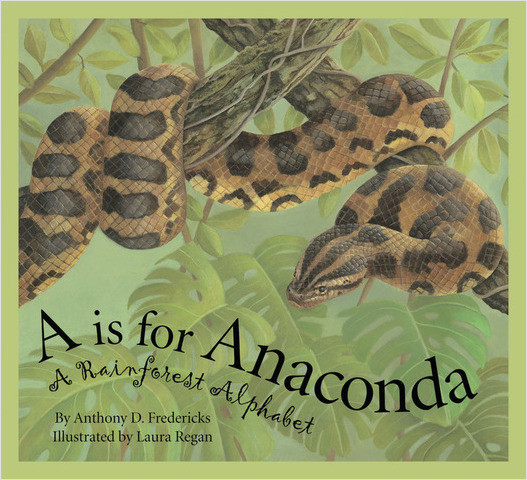 A is For Anaconda

At one time rainforests covered about 14% of the earth's surface; now they're reduced to just 6%. As home to some of the most diverse plant and animal species ever known, this decline has grave implications for both man and animal kingdoms. A is for Anaconda: A Rainforest Alphabet explores the world's rainforests as it explains their important role and showcases their wonders. Nature writer Anthony Fredericks gives an A-Z tour of the many facets and fascinating facts of these tropical environments. Exotic inhabitants including the basilisk lizard and kinkajou are highlighted, along with explanations of forest structure such as understory and canopy. In A is for Anaconda young readers will meet the many endangered plant and animal species, understand the progression of a food web, and appreciate why the rainforest has been called the "world's medicine chest."Anthony D. (Tony) Fredericks is a frequent traveler to the rainforests of Hawaii and Central America. He is the author of many nature and animal books for children, including several award-winning titles. When not visiting classrooms across the country, Tony teaches education courses at York College in York, PA. Laura Regan is nationally known for her rich, contemporary style of painting and her many award-winning children's books featuring exotic flora and fauna. Her artwork has been used to raise funds for many wildlife organizations. Laura lives in the Bay Area in California.

A is for Anaconda: A Rainforest Alphabet - Teaching Guide