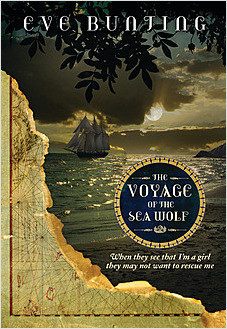 Gr 5-7–Marooned on an island in The Pirate Captain’s Daughter (Sleeping Bear, 2011), Catherine and William are rescued by the pirate crew of the Sea Wolf at the start of this story. The two lovers vow to stay together, but they are not prepared for what awaits them. Catherine is surprised to discover that the ship’s captain is a woman, and even more surprised that she takes a liking to William. When she finds out that the previously disguised Catherine is a girl, Captain Medb Moriarty forbids the two to have any contact, and locks Catherine in her quarters with her at night. Moriarty has her sights set on plundering two other pirate ships–Catherine’s former ship The Reprisal and the bountiful Isabella–and she intends to make William her partner. Catherine is desperate to escape with William, but she fears that he’s having second thoughts about his feelings for her. She spends her days mending sails alongside the friendly dwarf Sebastian, pining for William and thwarting the unwanted advances of lecherous Magruder. Catherine finally finds her strength when the Sea Wolf comes upon the beached–and presumably abandoned–Isabella and she must rescue William after a bloody surprise attack. A quick read for fans of pirate tales.