A Review of "The Twelve Days of Christmas" in Kirkus Reviews 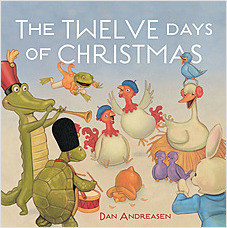 This version of the traditional holiday carol features a restrained, streamlined interpretation intended for younger children who may not be familiar with the song’s complicated cast of characters. Most illustrated editions of this song use a cumulative approach, resulting in concluding pages crammed with dozens of characters to count and an overall frenetic vibe. This version’s approach focuses on a baby partridge that is ever more bewildered by each new set of animals that arrives day by day. The first delivered gifts are comical-looking turtledoves, and the later groups of characters are animals in costumes: cats as milkmaids, rabbits as dancing ladies and tortoises as drummers. Each of these larger groups has its own visit with the partridge, with a final spread showing the partridge hiding from the increasing cacophony and a wordless, final page showing the tuckered-out partridge in post-holiday exhaustion. The animal characters are amusing but not compelling, set against muted, cool lavender backgrounds that convey the calm atmosphere this petite partridge prefers. Though there are several sumptuously illustrated versions of this song in print as well as many clever parodies, this is the only simpler edition of the song currently available.