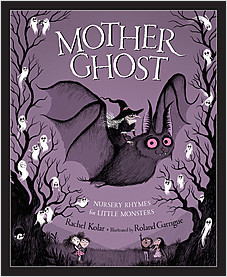 This collection of shivery Mother Goose rhymes is sure to put kids in the Halloween spirit. Opening with a spin on “Boys and Girls, Come out to Play,” Kolar sets kids up for the 12 to come: “Come with a whoop and come with a call; / Come with brave hearts or not at all.” All the favorites are here: “Mary Had a Little Ghost,” “Zombie Miss Muffet” (which doesn’t end well for the spider), “Sing a Song of Witches,” “Mary, Mary, Tall and Scary,” “Little Boy Drac.” Kolar’s scansion is spot-on with the originals, making them delicious to read aloud: “Frankenstein had a marvelous mind, / And a marvelous mind had he; / He called for some arms and he called for some eyes / And he called for his thunderbolts three.” Not all are creepy, though: “Twinkle, twinkle, lantern Jack, / Grinning orange against the black, / Crouched beneath the window light / Like a watchman in the night.” “Wee Willie Werewolf” rounds out the collection: "Growling at the window, howling to the skies, / ‘Are the monsters all in bed? The sun’s about to rise!’ " Garrigue’s appropriately spidery illustrations employ a palette that’s heavy on purple and black, and there are lots of creepy details for observant readers to spy. Of the humans/humanoids who are alive, three have brown skin, and the rest are pale; almost none have discernible chins. A treat for those who like their tricks on the scary side.