A Review of "G is for Gold Medal: An Olympics Alphabet" in Through the Looking Glass Children's Book Review 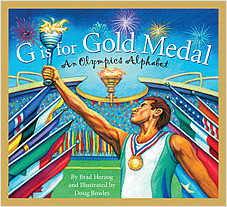 Long ago in ancient Greece, wars between the city-states were a common occurrence. The only time peace could be guaranteed was every four years, when the citizens of the city-states would lay down their arms for a month and come together to compete as athletes. The games were hosted in the town of Olympia, and the men who won the races and other events were given an olive wreath to wear.

The modern Olympic Games came into being because Baron Pierre de Coubertin felt that the “a modern version of the Olympic Games would foster peace between nations.” Because of his efforts, there has been a summer Olympic Games every four years since 1896 except in 1916, 1940, and 1944, which were, ironically, all years when the world was being torn apart by war.

In this fascinating fact-packed alphabet book, Brag Herzog tells us about the Olympic Games from A to Z. Beginning with Ancient Greece on the A page, he goes on to tells us about Baron Pierre de Coubertin on the B page. On the “C is for all the countries page,” we learn that in 2008 two hundred countries sent athletes to the Summer Olympics. Next is D for decathlete. On this page, we learn that for two days decathletes who up to the daunting task compete in ten events. These events include shot put, long jump, high jump, and running.

For each of the topics explored in this book, the author gives us a poem that introduces the subject. He supplements this with a more in-depth section of text. Young children will enjoy the hearing the poems and looking at the art, while older readers will be interested in reading the longer text sections. This format makes this book suitable for readers of all ages, from age 6 and up.

This is one of the titles in a series of alphabet books published by Sleeping Bear Press.