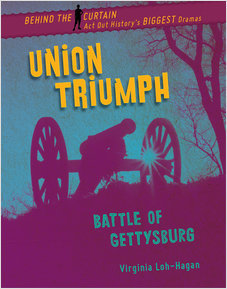 Gr 3-5–This series allows children to immerse themselves in the past through a unique and rarely seen approach. An engaging blend of historical events with readers’ theater brings the prose to life. After presenting simplified background information, the books present a cast of characters, all of whom were real individuals, and a two-act script fictionalizing the event. The scripts are written through a modern lens, with the occasional anachronism, even going so far as to predict future repercussions. Despite the heavy nature of some of the topics, the series is accessible to the intended audience. More than just dramatic retellings, anecdotes of marginalized groups are provided, real-world settings and monuments of significance are described, and even historical bloopers are detailed, all of which are accompanied by original and reenacted visuals. VERDICT The unique approach to enlivening history via readers’ theater makes this series a worthy purchase.