After graduating from college with a diploma in Design Arts, Todd Chapman began his first job as a toy designer, designing children’s toys and games. His career has since taken him into many areas of the high tech world including printing and publishing, film and animation, networking and the World Wide Web. 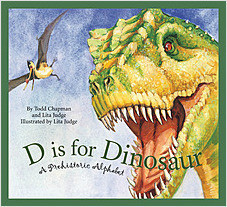 D is for Dinosaur: A Prehistoric Alphabet