Zong-Zhou Wang was born in Shanxi Province in the People’s Republic of China. He graduated from the Central University of Nationalities in Beijing, China with a major in fine art, specializing in oil painting. After graduation from the university, he was offered a position as one of the teaching faculty members. In 1988, he won First Prize in the First Nationwide Oil Painting Competition in China and The National Teacher’s Painting Competition in Beijing, China. He is a member of the Chinese Artists Association, a prestigious academic organization of Chinese artists, and his paintings have been collected by the association for its permanent collection. This is one of the highest honors attainable by a Chinese artist. He is included in the Dictionary of the Achievements of World Chinese Artists, the Artists of Chinese Origin in North America Directory, and the World Famous Chinese Artist Almanac. His work has been exhibited all over the world. 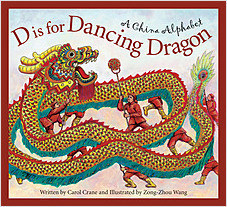 D is for Dancing Dragon: A China Alphabet