The son of immigrants from rural Italy, Mario Cuomo could barely speak English when he began first grade in the New York City public schools. He went on to become a lawyer, was appointed secretary of state for New York, and eventually was elected its governor. He served as governor for 12 years, after which he returned to private law practice. 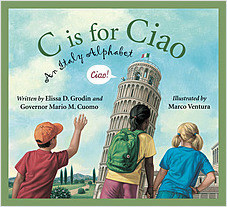 C is for Ciao: An Italy Alphabet